John Hart is the author of six New York Times bestsellers: The Hush, The King of Lies, Down River, The Last Child, Iron Horse, and Redemption Road. The only author in history to win the best novel Edgar Award for consecutive novels, John has also won the Barry Award, the Southern Independent Bookseller’s Award for Fiction, the Ian Fleming Steel Dagger Award, the Southern Book Prize and the North Carolina Award for Literature. His novels have been translated into thirty languages and can be found in over seventy countries. A former defense attorney and stockbroker, John spends his time in North Carolina and Virginia, where he writes full-time. 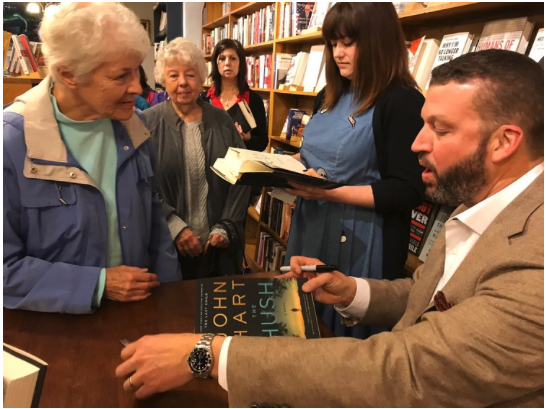 The Secret to Southern Charm, was one of Southern Living’s Best Spring Break Reads, a 2018 Spring Okra Pick,USA Today Happy Ever After’s Best Women’s Fiction, Southern Living’s Most Anticipated Beach Reads and featured on New York Live as a part of “Ashley’s A-List.” Your support keeps books on our shelves and in our community.

All purchases made through our BookShop Store will directly benefit our store.

By Alissa Redmond | September 8, 2020
From Downtown Salisbury Inc: Did you know that Downtown Salisbury’s local bookstore has donated over $13,000 worth of books to Little Libraries Rowan just in this past year?! This generosity...

By Alissa Redmond | June 30, 2020
SALISBURY, N.C. -- Stocking the free little libraries in Rowan County is not a new concept for a Salisbury business owner. Alissa Reymond is the owner of South Main Book...

By Alissa Redmond | June 25, 2020
SALISBURY — Alissa Redmond began stocking the Free Little Libraries at county schools with books in May as a way to give back to the community who continued to support...

By Alissa Redmond | June 23, 2020
I purchased an independent bookstore in Salisbury, North Carolina just six months ago, after taking leave from my career as a foreign service officer with the U.S. Department of State....